Cyclical recovery is nearing its end

Growth remained robust in 2018, but it is expected that it will taper down in 2019. This will be due to structural headwinds, as cyclical tailwinds begin to phase out. The economy suffered from a devastating earthquake, typhoons, and severe floods in 2018. Export growth has started to decline in line with a global slowdown and risks related to the trade war between the United States and China. Private consumption picked up in 2018, favoured by higher real wages, with total cash earnings jumping to 3.6% YOY in June: the fastest pace of increase since 1997. However, private consumption will slow in 2019. Wage growth in 2018 was related to temporarily higher inflation expectations and a tight labour market: the unemployment rate stood at 2.3% in September, the lowest level since June 1994. However, wage growth is scheduled to slow, constrained by companies’ sticky deflationary mind-sets and rigidities in the labour market (lifetime employment system). Employees are unlikely to increase their spending enduringly if they believe payments are one-off. Moreover, a sales tax hike is currently scheduled for the second half of 2019, which will drag on domestic demand. In turn, weak domestic demand will exacerbate deflationary pressures. There was modest pickup in headline inflation in 2018, but this can be traced back to higher import prices, notably oil. Consumer price inflation is expected to remain significantly below the Bank of Japan’s (BoJ) 2% target going into 2019. Private investment will likely remain sluggish as investors wait to see signs of a real pickup in domestic demand. This caveat notwithstanding, corporate profits, cash reserves, and liquidity conditions remain favourable. BoJ will likely keep its ultra-accommodative monetary policies in place throughout 2019 and 2020, which will continue to sustain economic momentum.

The fiscal deficit is expected to widen further in 2019, with the main factors driving this deterioration being ongoing fiscal policy stimuli, as well as reconstruction work following devastating floods in southwestern Japan in June and typhoon Jebi in September 2018. Infrastructure investments ahead of the Tokyo 2020 Olympic Games will also add to budgetary pressures. These are a constant in Japan, but the space for further stimuli is rapidly depleting, as social spending already weighs significantly on the state budget: Japan’s debt service burden represents 25% of GDP. Moreover, there is no easy way to boost state revenues. The government decided to postpone the next VAT hike (from 8% to 10%) until October 2019, which should help boost revenues post-2020, even if private consumption will likely decline in the short-term. Front-loading ahead of October is possible, which would exert upside pressure on GDP in the third quarter. However, the Japanese economy entered a recession in the quarters following the last sales tax hike in 2014 – a scenario which could repeat itself again in the fourth quarter of 2019. The current account is expected to remain in surplus, but this will narrow going into 2019 and 2020. The yen has remained weak against the dollar relative to 2017 levels, which played a role in boosting exports. However, the currency is expected to appreciate in 2019, worsening the terms of trade. Export growth is also set to decline due to slower global demand. Moreover, exports may be impacted by the US-China trade war, as Japan is exposed via supply-chain links. The current account surplus will also benefit from inflows on the services front, as a result of the rise of tourism. The economy has benefitted from higher tourism revenues, led by Chinese tourists. This trend could slow if the yen appreciates significantly relative to the yuan.

Prime Minister Shizo Abe won a snap election on October 2017. However, despite his Liberal Democratic Party (LDP) managing to secure a majority, reforms have been slow to materialise. This includes reforms to unlock labour productivity under the “Third Arrow of Abenomics”, as well as constitutional reforms that would allow Japan to increase military spending to 3% of GDP for defensive. Although higher military spending can contribute to GDP growth, in Japan’s case it could clash with other social spending in the context of existing budgetary pressures. Prime Minister Abe has also stated that he is keen to revive the Trans-Pacific Partnership, signalling a diversification away from strategic dependence on the United States, and towards a more multinational approach. On May 2018, the trade ministers of the countries that signed the original deal – excluding the United States – met to revive the pact. Japan is simultaneously working on a bilateral trade agreement with the United States. Japan has also recently signed a commercial agreement with the EU.

Japan has ratified the International Conventions of June 1930 on Bills of Exchange and Promissory Notes, and of March 1931 on Cheques. As a result, the validity of these instruments in Japan is subject to the same rules as in Europe.

The bill of exchange (kawase tegata) and the much more widely used promissory note (yakusoku tegata), when unpaid, allow creditors to initiate debt recovery proceedings via a fast-track procedure, subject to certain conditions. Although the fast-track procedure also applies to cheques (kogitte), their use is far less common for everyday transactions.

Clearing houses (tegata kokanjo) play an important role in the collective processing of the money supply arising from these instruments. The penalties for payment default act as a powerful deterrent: a debtor who fails twice in a period of six months to honour a bill of exchange, promissory note, or cheque collectable in Japan is subsequently barred for a period of two years from undertaking business-related banking transactions (current account, loans) with financial establishments attached to the clearing house. In other words, the debtor is reduced to a de facto state of insolvency.

These two measures normally result in the calling in of any bank loans granted to the debtor.

Bank transfers (furikomi), sometimes guaranteed by a standby letter of credit, have become significantly more common throughout the economy over recent decades thanks to widespread use of electronic systems in Japanese banking circles. Various highly automated interbank transfer systems are also available for local or international payments, like the Foreign Exchange Yen Clearing System (FXYCS, operated by the Tokyo Bankers Association) and the BOJ-NET Funds Transfer System (operated by the Bank of Japan). Payment made via the Internet site of the client’s bank is also increasingly common.

In principle, to avoid certain disreputable practices employed in the past by specialised companies, only lawyers (bengoshi) may undertake debt collection. However, a 1998 law established the profession of “servicer” to foster debt securitisation and facilitate collection of non-performing loans (NPL debts) held by financial institutions. Servicers are debt collection companies licensed by the Ministry of Justice to provide collections services, but only for certain types of debt: bank loans, loans by designated institutions, loans contracted under leasing arrangements, credit card repayments, and so on.

A settlement is always preferable, so as to avoid a lengthy and costly legal procedure. This involves obtaining, where possible, a signature from the debtor on a notarised deed that includes a forced-execution clause, which, in the event of continued default, is directly enforceable without requiring a prior court judgement.

The standard practice is for the creditor to send the debtor a recorded delivery letter with acknowledgement of receipt (naïyo shomeï), the content of which must be written in Japanese characters and certified by the post office.

The effect of this letter is to set back the statute of limitation by six months (which is five years for commercial debts). If the debtor still fails to respond, the creditor must start legal action during that period to retain the benefit of interruption of the limitation period.

If the debtor contests the order within two weeks of service of notice, the case is transferred to ordinary proceedings.

Ordinary proceedings are brought before the Summary Court (kan-i saibansho) for claims under JPY 1,400, and before the District Court (chiho saibansho) for claims above this amount. Those proceedings, partly written (with submission of arguments and exchanges of type of evidence) and partly oral (with respective hearings of the parties and their witnesses) can take from one to three years as a result of the succession of hearings. These proceedings generate significant legal costs.

The distinctive feature of the Japanese legal system is the emphasis given to civil mediation (minji chôtei). Under court supervision, a panel of mediators – usually comprised of a judge and two neutral assessors – attempts to reach, by mutual concessions of the parties, an agreement on civil and commercial disputes.

In practice, litigants often settle the case at this stage of the procedure, before a judgment is delivered. While avoiding lengthy and costly legal proceedings, any transaction obtained through such mediation becomes enforceable once approved by the court.

Japanese law provides for an exequatur procedure in order for foreign awards to be recognised and enforced. The court will verify several elements, such as whether the parties benefited from a due process of law, or if enforcement will be incompatible with Japanese public policy. Furthermore, if the issuing country does not have a reciprocal recognition and enforcement treaty with Japan, the decision will not be enforced by domestic courts.

There are two types of restructuring proceedings. The first of these is corporate reorganisation proceedings (kaisha kosei), which are typically used in complex insolvency cases involving stock companies. They come with the mandatory appointment of a reorganisation trustee by the court and with a stay against enforcement by both secured and unsecured creditors. The court typically appoints a third-party bengoshi with substantial experience in restructuring cases.

The second of these is civil rehabilitation proceedings (minji saisei), which are used to rehabilitate companies of almost any size and type. The debtor-in-possession (DIP) administers the rehabilitation under supervision of a court-appointed supervisor. Enforcement by secured creditors is not stayed in principle. The debtor must enter into settlement agreements with secured creditors in order to continue using the relevant collateral to conduct their business.

There are two winding up proceedings. In bankruptcy proceedings (hasan), the court appoints a lawyer as trustee to administer the proceedings. Enforcement by secured creditors is not stayed; rather, they can freely exercise their claims outside of the bankruptcy proceedings. The trustee will usually attempt to sell secured collateral with the agreement of the secured creditors and contribute a percentage of the sales proceeds to the estate. The debtor’s estate is distributed to creditors in accordance with prescribed statutory priorities without any need for voting by the creditors.

The second, special liquidation (tokubetsu seisan), is used for stock companies. A liquidator is appointed by either a debtor’s shareholders or the court. Distributor of the debtor’s estate to creditors has to be approved by creditors with claims to two-thirds or more of the total debt or by way of settlement. This procedure is used when the debtor’s shareholders are confident that they will obtain creditors’ cooperation for the liquidation process, and wish to control the liquidation process without involvement of a trustee. 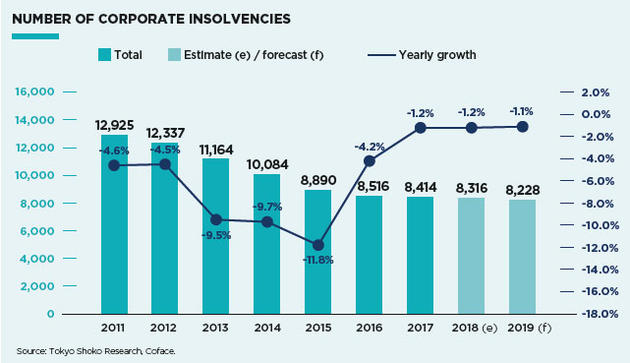