Analyses show a strong and expanding CEE region with decreasing risks in 2017, which also translated into higher revenues and net profits at the region’s 500 largest businesses. Competition at the top is getting more intense.

As the Central and Eastern European region (CEE) continued booming, companies enjoyed a supportive macroeconomic environment in 2017, with the average GDP growth rate soaring to its highest level in the last eight years of 4.5%, after 3.1% in 2016 and 3.7% in 2015. Coface forecasts indicate that this will remain at a solid 4.1% in 2018. Although social risk has risen in the last decade, the CEE region remains much less risky than other emerging markets. Hard data indicate that political issues have not yet negatively impacted CEE economies and businesses. The inflow of foreign investment remains positive and a number of large investments have been and continue to be made in the region.

Business conditions were supportive for companies in the CEE region, especially those large ones as confirmed by the CEE Top 500 ranking. In 2017, Coface upgraded the Country Risk Assessments of several countries in the region (Bulgaria, Czech Republic, Estonia, Hungary, Latvia and Serbia) and also of Russia, leaving only Croatia and Serbia with a fairly high risk of business default.

The results of the ranking of the region’s largest companies demonstrate that the majority of big companies were taking full advantage of the very favorable economic environment. The CEE Top 500 outlines the economic situation at the 500 largest companies in Central and Eastern Europe, measured by turnover. Overall turnover at the 500 top companies increased steeply by 11.8% to EUR 652 billion. Whereas 398 (79.6%) of the listed businesses recorded revenue growth (versus 63% in 2016 and 70% in 2015), only 20.4% stagnated or faced a drop. However, the battle for the top spot is getting tougher. Aggregated net profits amounted to EUR 31,496 million (+16.2%) and employment at the 500 largest companies to 2.4 million people (+4.7%). 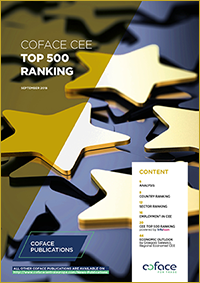