Pharmaceutical companies in the United States face two opposing scenarios for their business: "optimistic" or "pessimistic”

Despite strong private and public investments, health indicators in the United States are below average compared to the 12 most advanced countries

The gradual implementation of the Affordable Care Act has improved the population's access to health insurance at reasonable costs. Another crucial point appearing on the programmes of US presidential candidates is the reduction in prices of costly prescription drugs. Three personal bankruptcies out of five in the US are due to healthcare-related debts, as healthcare coverage remains unequal and, unlike in other advanced countries, drug companies can freely set drug prices. They justify the high costs by high spending on R&D and the relatively short average duration of patent rights on a worldwide level. Despite the shock to the US economy in 2008-2009, drug prices have continued to rise, with no slowdown phase.

The United States is currently the leader among advanced countries, in terms of the resources that it invests in healthcare (17.1% of GDP in 2014). Despite this, the results are far below Western standards : life expectancy is lower, the obesity rate is double, infant mortality is higher and there is a high prevalence of at least two chronic diseases among seniors.

The federal government finds it difficult to control drug prices (contrary to European public systems), due to the fragmented landscape of payers and their lower negotiating weight. In addition, the Affordable Care Act only covers the development of healthcare coverage and does not have the aim of bringing down drug prices.

In the short term, Coface forecasts a 9.3% rise in prices by the end of 2016 (following 7.2% in 2015 and 8.5% in 2014), mainly due to the arrival of extremely costly specialty drugs on the market. Within this favourable context for the drug companies, Coface is upgrading the North American pharmaceutical sector to "low risk".

In the long term, under the assumption that the system will be reformed (a possibility which is increasingly being discussed), the potential fall in prices would have positive impacts on patients, but would reduce the profitability of manufacturers. An example that illustrates this point is, that if French prices (which are in the low range of prices practiced in Europe) were applied in the United States, revenues from the drug Harvoni would fall by 45%.
The effect on R&D would also be significant. Given that the costs of bringing a molecule to the market is between USD 1 and 1.5 billion, a price reduction could trigger considerable cuts in R&D spending. The impact would be even greater if the company had a large footprint in Europe (where prices are set via public health systems), and would thus reduce the incentive to invest in R&D. 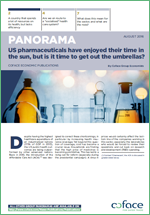 A country that spends a lot of resources on its health, but lacks efficiency
Are we en route to a "socialised" health care system?
What does this mean for the sector, and what are the risks? 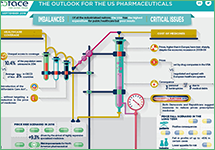 
The outlook for the US pharmaceuticals

PANORAMA: US pharmaceuticals have enjoyed their time in the sun, but is it time to get out the umbrellas?