Infrastructure: the Achilles’ heel of development in Latin America 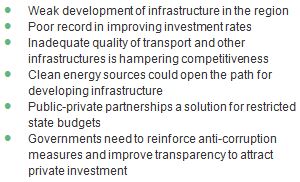 The fragile performance of recent years highlights the region’s competitiveness issues. What are the weaknesses in the infrastructures in Argentina, Brazil, Chile, Colombia, Ecuador, Mexico and Peru?

Growth in Latin American economies took place during the buoyant commodities cycle that lasted over a decade, until around 2014.  This era of strong performance was not, however, leveraged to the benefit of developments in infrastructure.

As from mid-2014, falls in international prices had strong repercussions on the region’s activities and exposed its vulnerabilities. The consequent currency depreciations were not sufficient to boost the competitiveness of manufacturing goods and led to the deterioration of trade balances.

The region’s challenges are compounded by a combination of factors which are unfavourable to businesses such as its labour regulations, heavy taxes, general education levels, complex bureaucracy and inadequate infrastructures. The Economic Commission for Latin America and the Caribbean (ECLAC) estimated that the region needs to invest 6.2% of its annual GDP in infrastructure, for the period from 2012 to 2020 - but currently none of the region’s major economies are investing more than 3% of their GDP.

Inadequate port and other transport infrastructures are hampering competitiveness

1) Transport infrastructure is clearly deficient in Argentina, Brazil, Colombia and Peru.
2) Road quality is the Achilles’ heel of countries in the region.
3) The inferior quality of port infrastructures is particularly a problem in Brazil.
In fact it is sometimes cheaper to transport a product abroad, rather than to another state in the same country. 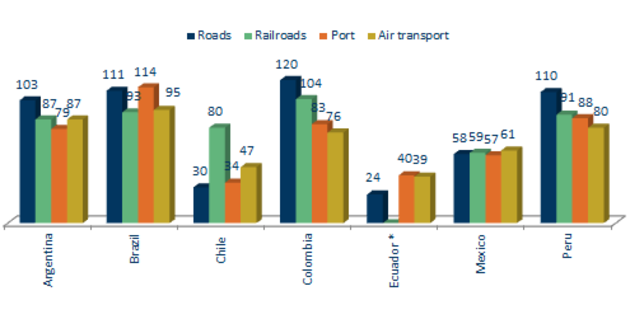 The region’s power generation is highly dependent on hydro and thermal sources although, as in other parts of the world, this reliance is expected to lose strength.  While thermal energy usually implicates high costs and more pollution, the construction of hydro plants frequently faces anger from local populations due to environmental impacts. Moreover in recent years many countries have faced prolonged droughts caused by the El Niño weather phenomenon. These events have exposed the risks of relying on hydro resources.

Chile is one of the countries that has engaged in the development of clean energy sources.  Its government has set a target to produce 20% of its electricity from non-hydro renewable resources by 2025. The cost of energy production is subsequently expected to be around a third lower than current levels. Argentina also has bright perspectives for renewable energies.  Under the leadership of Mauricio Macri, the country has launched a renewable energy auction programme. During the first two tenders held last year, 59 projects valued at 4 billion USD were auctioned.

With public expenditure under pressure, Public Private Partnerships (PPPs) have gained strength in the region. Nevertheless, lack of transparency, unattractive conditions and limited sources of funding are just some of the issues that still need to be addressed in order to boost private investments.

According to the Economist Intelligence Unit indicator for PPP environments, Chile and Colombia are the best prepared countries in Latin America for public-private partnerships. The 2017 edition of the report highlights the steady advancement of the sector in the region, although there is still a need for improvements in transparency across the PPP process.

Corruption scandals lead to delays in investments and incite the mistrust of foreign investors. Effective punitive measures are important in order to safeguard confidence and interest in public private partnerships.

In order to optimise the results achieved through investments in infrastructure, there are important aspects that need to be addressed:


Panorama: Time to address the infrastructure gap in Latin America