The first arrow of Abenomics: why is it not working?

Since the launch of Abenomics in early 2013, the Bank of Japan (BOJ) has been aggressively easing its monetary policy, commonly known as “the first arrow of Abenomics”. These measures have included the introduction of “Quantitative and Qualitative Monetary Easing (QQE)” in April 2013, the modified “QQE with a Negative Interest Rate” in January 2016 and the most recently announced “QQE with Yield Curve Control”, in September 2016. Just over 3.5 years since its launch, the impact of the first arrow has become less effective, particularly on Japan’s exports and the yen.

Why did the yen depreciation, which occurred during the early success of the first arrow, not boost Japan’s merchandise export volumes?

The muted impact of the yen depreciation on exports could be easily explained by the external forces of subpar world economic growth, which has been weighing on global merchandise trading activities, including Japan’s exports. A more structural reason is the “pricing-to-market” behaviour of Japanese exporters, which is keeping export prices steady at the foreign-currency equivalent of their domestic prices - despite the level of the yen. This is limiting the stimulation of demand for Japanese exports.

Which industries could be impacted most when the yen price fluctuates?

Another important factor determining the impact of the yen’s fluctuations on the profitability of Japanese manufacturers could be the share of invoice currency in their exports. Industries with a lower degree of exported product differentiation, resulting in a smaller share of invoicing in yen, are more sensitive to fluctuations in the yen. These industry players are therefore more vulnerable during times of yen strengthening, but enjoy boosted profitability during times of yen weakening.

Combining these theoretical and empirical assessments, the textile and chemical industries are more vulnerable in times of yen strengthening, while the general machinery industry is relatively less so.

The strengthened expansionary monetary policy appears to be losing steam. What will happen next?

In theory, an increase in money supply, amid expansionary monetary policy, should lead to currency depreciation. However, against the backdrop of market turbulence in 2016, the safe haven status of the Japanese yen kept it a somewhat stronger level,  despite the country’s strengthened expansionary monetary policy. With all things being equal, the marginal effects of further monetary stimulus are likely to diminish.

“The latest figures suggest that Japan could, once again, be in a liquidity trap. What is more alarming is that there has been little sign of the risks of deflation waning. With limited room for either monetary or fiscal policy, the Japanese government needs to undertake bold deregulation and structural reforms in order to boost productivity and growth in wages. Otherwise, Japan’s situation of low-growth and deflation is set to remain”,said Jackit Wong, Asia-Pacific economist of Coface. 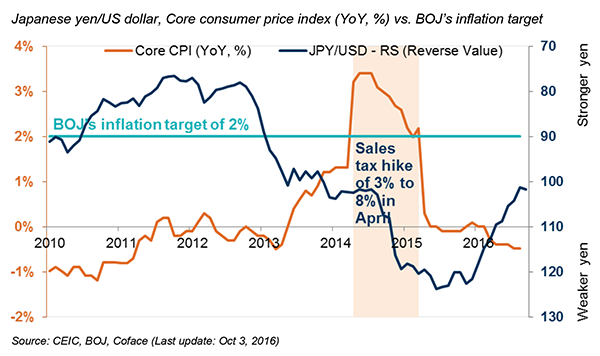 Download this press release : The first arrow of Abenomics: why is it not working? (367.88 kB)


PANORAMA: Abenomics: The first arrow has silent impact on Japan’s exports and the yen, why?