Risks are back on the radar in emerging countries

Despite resilient growth, estimated at 5.1% in 2013, and improved sovereign and exter-nal fundamentals, emerging country risks have not disappeared altogether, but have changed form. Three major risks now weigh on emerging markets. Politically, tensions have sharpened, illustrated by protests in North Africa and the Middle East, and now also in Russia and India. Economically, we are seeing a rise in protectionist measures. Financially, excessive growth in bank loans to the private sector in a number of emerg-ing economies is stoking fears of a credit bubble, in Asia in particular.

Rising political instability risk, fed by growing frustration, but also by the marked capacity to translate these frustrations into action

The wave of revolutions in the Arab world revealed new political, cultural and institutional demands in emerging societies. To analyse a society’s capacity for political fracture, Coface has created an interpretive lens with two types of indicators: pressures for change (inflation, unemployment, control of corruption, etc.), which measure the intensity of socio-political frustration in a given country, and the instruments for realising change (education, social networks, percentage of young people in the population, the role of women, etc.), which capture the society’s capacity to transform these frustrations into political action.

Of the 30 emerging countries examined, North Africa and the Middle East regions stand out clearly by the presence of both strong pressure and instruments for change. This analysis points to the persistent nature of the risk of instability in the region, especially where post-revolutionary regimes have proven incapable of meeting the demands of their populations, which put them in power in the first place.
Nigeria, Russia, Kazakhstan and China all show frustration levels above or equal to the situation in Tunisia and Egypt, but with fewer instruments for change, a situation which limits their capacity to transform frustration into radical political change. 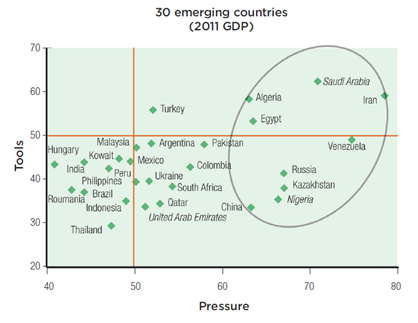 Since 2008, capital controls and protectionism have become weapons of protection against forces outside the control of emerging economies. They also represent a risk for business. Note that Russia, Argentina, and to a lesser extent, India have by far the highest levels of protectionism, while Mexico, South Africa and Turkey remain relatively open to international trade.

Massive recourse to restrictive measures can result in longer payment delays for importers, and more barriers to entry for companies exporting to these protectionist countries. While the effects seem limited for now on a global scale, they are expected to be exacerbated against a backdrop of increasing international division of production processes, with a negative impact on companies across the value chain. In addition, it is a trend that is likely to impact more on European countries seeking dynamic growth opportunities during a period when domestic de-mand remains depressed.

Rising risk of a credit bubble in emerging Asian markets

Expansionist monetary policies in place in emerging economies since the 2008-2009 crisis and failures in prudential controls have generated sustained growth in bank credit, to the point of forming credit bubbles.

Based on a summary indicator of credit bubbles comparing credit stock levels and credit growth, Coface estimates that emerging Asia is the region most at risk (Malaysia, Thailand and, to a lesser extent, Korea, China and Taiwan). While credit stock to the private sector in other countries is not as high, it is rising rapidly. 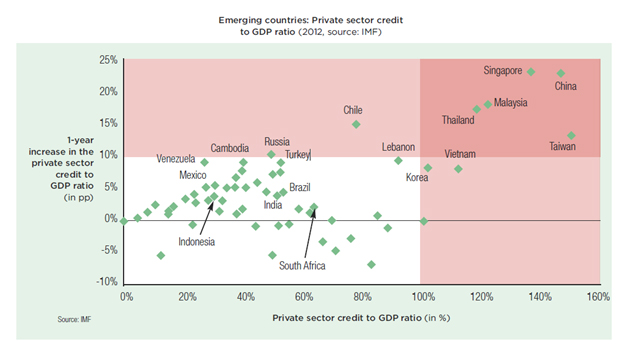 Download this press release : Risks are back on the radar in emerging countries (87.07 kB)