Focus on the future of solar energy in Europe: photovoltaics

Despite competition from China and the end of subsidies, the revival of the European photovoltaic industry seems likely.

Although photovoltaics only accounts for 5.3% of total electricity consumption in Europe, this sector has benefited from worldwide momentum in favour of "greener" energy consumption. Between 2004 and 2012 European electricity from photovoltaics increased sharply, from 0.7 to 62.4 billion KWh. This growth was driven by Germany, Spain and Italy, where 80% of Europe's photovoltaic facilities were located. The sudden expansion of photovoltaics was made possible by favourable government policies (a system of renewable purchase obligations and subsidies), plus the sharp and continued drop in the price of installations, intensified by Chinese competition. Europe led the field at that time, accounting for 75% of worldwide production in 2012.

The decline in solar energy was as sudden as its rise had been. The bubble burst in 2011 was preceded by an end to national and European subsidies, following the multiplication in the number of speculative projects, and accompanied by a price war for the modules. Successive economic crises had also weakened companies, who experienced declining bottom-lines. As a result, company insolvencies in the sector peaked in Europe between 2011 and 2012. In France, for example, they almost tripled.

Consequently Europe, which for a long time had led the development of photovoltaics because of its commitments and existing installations, has fallen behind Asia, which now has 60% of the installations. Coface economists consider that this slowdown is temporary, and remain optimistic about the position of photovoltaics in the European energy mix in the medium term.

Short term: the problem of electricity overcapacity in Europe

In the short term, the growth in renewables in general, and photovoltaics in particular, risks being curbed by the power production overcapacity in Europe.

The post-crisis decline in manufacturing activity caused electricity use to decline sharply from 2010. This situation led to overcapacity and drove wholesale electricity prices down, which had a greater impact on suppliers whose fixed costs were already high. At the same time, the overcapacity problem was magnified by the general public’s desire to move towards a "greener" power use favouring energy savings. As a result, the amortisation of costs linked to past capital expenditure became a heavy burden, since the earnings of the "traditional" players had fallen. This oversupply and the lack of interconnections between European countries make the power generation sector less attractive.

In the medium term, it seems likely that the photovoltaic sector will recover, primarily due to European energy integration. The problem of irregularity, due to differences in the intensity of sunlight, would be overcome. This would also allow new storage systems to be developed and lead to continuous adjustments in power supply and demand across the various networks. The European Union's current goal of 10% interconnection development (in terms of annual consumption), at an estimated cost of 150 billion Euros, has only been reached today by Germany and France in the group of five countries studied.

"For companies, the sector's good medium-term prospects will benefit services related to the servicing and maintenance of solar panels. To a large extent, the manufacture of panels will remain primarily in foreign hands, even if German companies have managed, through automation, to bring prices down to the levels of the Chinese modules", Coface economist Khalid Aït Yahia explained.

Lastly, there are the issues linked to the climate change conference COP21. These will include improving access to renewable energy, supporting development internationally, and creating significant market opportunities. Targets already exist in Europe: greenhouse gas emissions are to be reduced by another 20% by 2020, representing a 40% reduction from 1990 levels. This reduction is equivalent to closing 400 power stations. New measures may be introduced by a scissor effect: The cost of traditional power sources will rise, while power from photovoltaics will get cheaper, which will reduce installation costs and in the end make the investments more profitable. 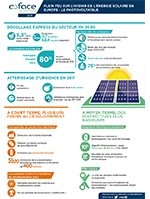 Bankruptcy of companies within the photovoltaic sector can have serious consequences for your business. With Coface, it is possible to secure your transactions and protect your company against the risk of non-payment; whether due to insolvencies or late payments. To find out how, ask one of our experts!

Download this press release : Focus on the future of solar energy in Europe: photovoltaics (217.51 kB)

Infographics: Focus on the solar energy in Europe: Photovoltaics