Domestic demand started to lose momentum in mid-2019, meaning that the impulse of the 2018 minimum wage hike has probably been depleted. In addition, the prolonged political instability is by now weighing down on consumer and business confidence. Consumption of durable goods has been particularly hit. Furthermore, the pace of job creation will slow down, with unemployment stabilizing in the 13-14% range. Finally, households are using rising incomes to reconstitute their net wealth, with the savings rate projected to rise to 8.5% in 2019 and 10% in 2020. Because of this improvement to net wealth, private consumption is expected to recover slightly. This will bring the contribution of private consumption on par with investment as the two pillars of growth in 2020. Investment will remain robust, with both construction and industrial equipment supported by monetary easing. The transport equipment industry (including automobiles), which accounts for a fifth of Spanish exports, is facing significant pressures from protectionism and environmental regulations. More broadly, the manufacturing and agri-food industries will feel the effects of global trade tensions and the European slowdown. The tourism sector (15% of GDP) will again break records, with 84 million visitors in 2019, and continue to be a pillar of growth in 2020. Net exports, which carried growth in 2019, will again yield a positive contribution, albeit a smaller one due to an acceleration of import growth.

A fragile coalition, a rising far-right and a crisis in Catalonia

After negotiations to form a government with hard-left Unidas Podemos (UP) broke down during the summer, caretaker PM Pedro Sánchez of the center-left Socialist Party (PSOE) decided to call fresh elections, the second of 2019 and the fourth in as many years. The November poll again yielded a fractured parliament. PSOE and UP both performed slightly worse, going from 123 to 120 seats and from 42 to 35 seats, respectively. The sentencing of independentist leaders just before the election reinvigorated secessionist fervor in Catalonia, prompting massive and sometimes violent protests. At the same time, public opinion in broader Spain galvanized in favor of a more aggressive response to the Catalan crisis. This prompted the ascendance of the far-right party VOX, which doubled its presence in Parliament (from 24 to 52 seats) and became the third strongest political force. Liberal Ciudadanos, on the other hand, lost 47 of their 57 seats after going back and forth on supporting the investiture. ERC, the left-leaning catalan independentist party, emerged as king-maker and allowed for the formation of a coalition government with an ultra-narrow margin of two votes. Even in government, the left-wing coalition led by PSOE and UP still faces the challenge of passing a budget. For this, it will again need the support of ERC, who is in line with the expansionist program but will try to extract significant concessions on the Catalan issue. The survival of the coalition is anything but guaranteed, and fresh elections are not impossible.

An expansionist budget on the horizon (if the coalition survives)

In a successful budget vote, the deficit should increase and Spain will stray further away from the targets demanded by the EU. The PSOE-UP program aims to index pensions on inflation, raise the minimum wage, increase welfare measures and energy subsidies, among other measures which will increase expenditure. The corporate tax rate will increase for large corporations and decrease for SMEs, with particular taxes for banks and tech platforms, as well as income tax hikes for high-income housholds. Spain could find itself at odds with brussels only a year after exiting the excessive deficit procedure. While growth will not erode the public debt burden as much as it has in recent years, this effect will be more than compensated by cheaper debt service, with the ECB engaging in further monetary easing and sovereign spreads at record lows. Despite wage appreciation, a slowdown of productivity growth and a weaker external environment, the current account surplus will stay relatively stable thanks to the moderation of import demand. The structural difficulties of the manufacturing sector are offset by the robust tourism surplus, as well as the growing pharmaceutical and mining sectors. However, energy dependence translates into a goods balance structurally in deficit, and outflows of remittances and debt service payments ensure a negative income balance. With a large negative external position (70% of GDP) and external debt (150% of GDP), Spain is exposed to a reversal in global financial conditions, though this is mitigated by the large share of TARGET 2 flows (30% of GDP).

Cheques are widely used for corporate transactions in Spain. They offer similar legal safeguards under the juicio cambiario (Civil Prodecures Code) in the event of default. The same is true of promissory notes (pagaré), which, like bills of exchange and cheques, are instruments enforceable by law. If unpaid, they are recorded in the registry of unpaid acceptances (RAI, Registro de Aceptationes Impagadas). Attached to the Centre for Interbank Cooperation, the RAI is the country’s most important registry. It records all commercial payment defaults of over €300, thus allowing banks and other deposit institutions to verify a company’s payment record before extending credit.

In contrast, bills of exchange are rarely used commercially. In the event of defaults, they offer creditors certain safeguards, including access to special collection proceedings with instruments for negotiation under the civil procedures code (juicio cambiario). Bills of exchange that have been guaranteed by a bank can be somewhat difficult to obtain, but they do limit the risk of payment default by offering creditors recourse to the endorser of the bill of exchange.

Electronic transfers via the SWIFT network, widely used by Spanish banks, are a fast, fairly reliable and cheap payment instrument, provided the purchaser orders payment in good faith. If the buyer fails to order a transfer, the legal recourse is to institute ordinary proceedings, based on the unpaid invoice. Banks in Spain have also been implementing SEPA standards for euro-denominated payments.

Unless there are special clauses included in the commercial contract, the applicable rate of interest is that applied by the European Central Bank in its most recent refinancing operation (performed prior to the first calendar day of the half year concerned), with an additional eight percentage points. The rate is published by the Finance Minister every six months, in the Boletín Oficial del Estado. The statute of limitations for ordinary claims is five years.

There are no formalities or conditions for the dispatch of a reminder to the debtor, but it is advisable to send a claim to the debtor first. The creditor can obtain guarantees for the payment of the debt.

If no settlement agreement is reached with the customer, the creditor can initiate a legal collection process, using civil procedure law (ley de Enjuiciamento civil).

Exchange proceedings are used for claims based on bills of exchange, promissory notes and cheques. A judge of the first instance (juzgado de primera instancia) verifies that the ‘exchange title’ has been correctly implemented and then orders the debtor to make payment of both the principal amount and the late interests and costs, within ten days. The judge will also order a seizure for security (embargo preventivo) on the debtor’s assets, equivalent to the outstanding amount. The debtor has ten days to dispute the ruling.

If there is no payment received or opposition within the prescribed time, the judge will order enforcement measures. If necessary, the judicial representative will carry out attachment. When claims are contested, a court hearing is held to examine both parties’ arguments and a judgement should be handed down within ten additional days. Although this is time frame that is prescribed under Spanish law, it is rarely adhered to by the courts.

In addition to the juicio cambiario, creditors unable to reach a payment settlement out of court can enforce their rights through a civil procedure (juicio declarativo). Civil procedures are divided into ordinary proceedings (juicio ordinario) for claims of over €6,000 and oral proceedings (juicio verbal) – a more simplified system – for smaller claims. Both proceedings are initiated with a lawsuit served on the debtor.

The claimant is required to explain the facts of his claim and provide all supporting documents – either originals, or copies that have been certified by a public notary – on filing its initial petition. Prior to the investigation of the case, the judge will summon the parties during a first hearing (audiencia previa), using ordinary proceedings, to encourage a conciliation. If this is unsuccessful, the lawsuit will be pursued. The court can then order specific measures to clarify issues or facts that remain unclear, before passing judgment.

For monetary, liquid and overdue claims, whatever the outstanding amount (previously limited to up to €250,000), creditors can now benefit from a more flexible summary procedure. The filing of a petición inicial is directly submitted to the judge of first instance (juzgado de primera instancia) where the debtor is located. After reviewing the supporting documents, the judge can order the debtor to pay within 20 days.

If the debtor does not respond, the judicial representative will inform the judge and request confirmation of the decision in favour of the initial request. The judicial representative then hands down a ruling confirming the conclusion of monitory proceedings, which is transmitted to the creditor. This allows the creditor to contact the Enforcement Office for the next phase. If the debtor disputes the ruling and provides motivated arguments for this within a written statement signed by a barrister and a solicitor, a full trial on the case will be instigated.

When all appeal venues have been exhausted, domestic court decisions become enforceable. If the debtor fails to satisfy the judgment within 20 days, the Court Clerk, upon request, can seek out the debtor’s assets and seize them.

Decisions on foreign awards rendered by EU countries benefit from enforcement conditions, such as EU Payment orders and the European Enforcement Order. Judgements rendered by non-EU countries are recognised and enforced, provided that the issuing country is party to a bilateral or multilateral agreement with Spain. If no such agreement is in place, Spanish exequatur proceedings will be followed.

A debtor has the possibility of negotiating a formal refinancing agreement (acuerdo de refinanciacion formal) with his creditors. This agreement must be signed by the court. Within this agreement, the parties are free to write off as much of the debt as they deem necessary.

During these proceedings, the debtor may file for liquidation:

The judicial administration draws up a liquidation plan in order to realise (sell) the assets, consisting of the bankruptcy estate, which is submitted to the judge for approval.

Liquidation in Spain aims to sell the company’s assets. During this phase, the company retains its legal persona. Liquidators are appointed to execute the process and they can also take over the function of administrative body and company representative.

The liquidator cannot redistribute the company’s assets among its associates until all of its creditors have been paid and payment demands against the company have been settled. Aggrieved creditors can contest transactions that they believe may have taken place illegally during the allocation of the assets. 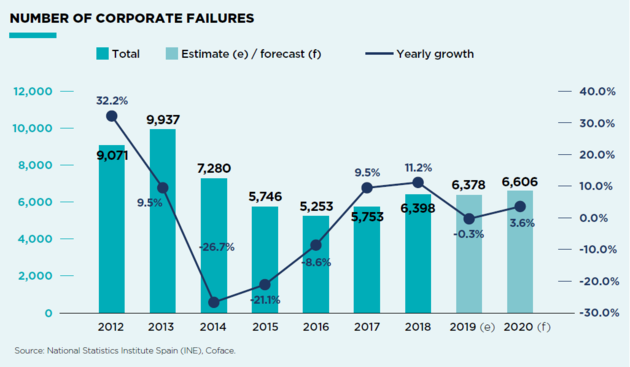