After a strong rebound in 2021, following the lifting of most pandemic-related restrictions in the second half of the year, activity should continue to recover in 2022, while gradually slowing. Although the dampening effects of the still-ongoing pandemic will further ease, the different impacts of the war in Ukraine are weighing on the growth prospects, notably with  the high inflation rate and heightened level of uncertainty straining the propensity to buy for private households. In March 2022, the inflation rate stood at 8.3%, reaching its highest level for almost 40 years, and will barely decline over the course of the year. In terms of public spending, the stimulus plan financed by European funds, worth EUR 5.9 billion (1.3% of GDP) for the period 2021-2026, is expected to peak in 2022, with EUR 1.5 billion of investments in energy transition, infrastructure, and digital transformation. While trade with Russia and Ukraine is limited (Russia: 1.0% of total exports and 2.4% of total imports, Ukraine: 0.2% and 0.1% respectively), the economy is vulnerable to the consequences of the war in Ukraine, as it is heavily dependent on regional trade. Although 40% of exports to the rest of the European Union are imports in transit, the Belgian economy will be affected by the slowdown in trade and further impairments to production and value chains. After contributing positively to growth in 2021, external trade is expected to be a dampener on activity in 2022. Weaker prospects for demand, ongoing procurement shortages, and elevated prices of raw materials and intermediate goods will weigh on companies’ profit margins and therefore on their gross capital formation  as well.

Slight improvement in public finances despite some support measures

The public deficit is expected to be gradually reduced in 2022. This improvement in the public accounts will be made possible mainly by an increase in tax revenues, driven by the moderate recovery in activity and employment. In addition to the increase in excise duties on tobacco, the additional revenue in 2022 will be attributable to income tax and the tax on securities accounts. In mid-March, the federal government announced a new package (EUR 1.3 billion) to support the purchasing power of private households. This package includes a VAT-cut on electricity to 6%, direct transfers of 200 euros per household for those that have oil heating, tax reliefs for motor fuel, as well as the extension of the social energy tariff, and of short-term allowances. Despite these measures, gross public debt is expected to fall slightly, while remaining very high. If the government pursues further expansionary measures, the slightly positive tendency in public finances could come to an end.

The current account should switch to a small surplus in 2022. As the Belgian economy is integrated into European production chains to the point of acting as a regional hub for the transformation of intermediate products into consumer products or capital goods, imports move in line with exports. However, with oil and gas prices soaring, the energy bill will weigh on the trade surplus in 2022.  Although substantial, external debt is much lower than the total assets held abroad, with the result that the country had a net external surplus position of about 48% of GDP at the end of 2021.

A still vulnerable Vivaldi coalition despite some important agreements

The federal parliamentary elections in May 2019 led to further fragmentation of the political landscape, followed by many months of fruitless negotiations, before an emergency government was established in March 2020 to tackle the pandemic. Seven months later, a majority government coalition, led by the Dutch-speaking liberal Alexander De Croo, was finally formed (87 seats out of 150 in the House of Representatives). This coalition, known as the “Vivaldi” coalition because it is made up of four groups (socialists, liberals, environmentalists, and Christian Democrats), includes seven parties: the French-speaking socialists (PS, 19 seats) and the Dutch-speaking socialists (Vooruit, 9), the French-speaking environmentalists (Ecolo, 13) and the Dutch-speaking environmentalists (Groen, 8), the French-speaking liberals (MR, 14) and the Dutch-speaking liberals (Open VLD, 12), and the Flemish Christian Democrats (CD&V, 12). Although the first year of the Vivaldi coalition was devoted to managing the health crisis, and despite the government reaching an agreement on the Budget 2022 in October 2021 and on the labour market reform five months later, the disparate nature of the coalition makes it extremely vulnerable. This is all the more true since the opposition ranks include the party that came out on top in 2019, the N-VA (Flemish conservatives, 24 seats), and the two parties that recorded the strongest growth at the time: the VB (far-right and Flemish nationalists, from 3 to 18 seats) and the PTB (united far-left, from 2 to 12 seats). Although the fear of extremist parties coming to power will help the coalition to stay together, political instability seems destined to persist in this fragmented landscape, a situation compounded by a growing divergence between Flanders, which is increasingly to the right, and Wallonia, which is increasingly to the left.

Bank transfers (SEPA & SWIFT) and electronic payments are the most frequently used methods of payment for businesses.

Cheques are seldom used and only in certain sectors (e.g. transport, fruit and vegetable wholesale). As cheques no longer benefit from a guarantee from the issuing bank, the cheque issuer’s account needs to contain sufficient funds in order to be for the cheque to be cashed. Issuing a cheque with insufficient funds is a criminal offence.

Bills of exchange are no longer used for payment in Belgium, except in certain sectors and in international transactions.

Payment defaults are no longer recorded in the Moniteur belge (MB, Belgian Official Journal), but they can be consulted on the National Chamber of Bailiffs’ website, where data is available to banks and professional organisations.

There are no special provisions for out-of-court debt recoveries between businesses. Creditors should attempt to gain payment from debtors by sending written reminders. Before beginning legal action against a debtor company, it is often worthwhile asking a lawyer to check the database of seizures.

Judgments are normally delivered within 30 days after closure of the hearings. A judgment is rendered by default in cases where debtors are neither present nor represented during the proceedings.

This procedure is rarely used in business-to-business cases, and cannot be implemented when the debt is disputed. A 2016 law implemented a new set of procedural rules, creating an out-of-court administrative procedure for non-disputed debts. When an order of payment has been issued, the debtor has a month to pay the amount. If the debtor refuses, the creditor can request a bailiff to issue a writ of execution. Moreover, under the new rules, lodging an appeal against a judgment will no longer suspend the enforceability of this judgment. Consequently, even if the debtor starts appeal proceedings, the creditor will be able to pursue the recovery of the debt.

This is a contractual provision stipulating that the seller retains title of goods until receipt of full payment from the buyer. Unpaid creditors can make claims on goods in the debtor’s possession. It therefore follows that the retention of title clause is enforceable in all situations where creditors bear losses arising from insolvencies, whatever the nature of the underlying contract. When goods sold under retention of title are converted into a claim (after a sale), the seller-owner’s rights referring to this claim (the selling price) are known as real subrogation.

Ordinary proceedings before the commercial court

All disputes between companies can be tried by the Commercial Court in Belgium. In cases of cross-border claims using European legislation, a European execution for payment proceedings can be enabled. Claimants also have recourse to European small claims proceedings.

Summon on the merits

The bailiff assigns the debtor a court date for the introduction of the case. If discussions do not take place, judgement will follow within four to six weeks. If there are discussions pending, parties need to put their intentions in written conclusions. After judgement, there is a possibility to appeal – if no appeal is filed, the execution will follow through the bailiff.

This judicial proceeding is conducted for the benefit of only one party (ex parte). There are three essential conditions to proceed with an attachment:

A debtor may request the cancellation of the attachment if it has been unjustly imposed. However, once an attachment has been imposed, it remains valid for a period of three years. Subsequently, a conservatory attachment may be transformed into an execution order.

A judgment becomes enforceable once all venues of have been exhausted. If the debtor refuses to execute payment, a bailiff can attach the debtor’s assets or obtain payment through a third party (Direct Action).

Foreign awards can be recognised and enforced in Belgium, provided that various criteria are met. The outcome will vary depending on whether the award is rendered in an EU country (in which case it will benefit from particularly advantageous enforcement conditions), or a non-EU country (for which normal exequatur procedures are applied).

Debtors can file for bankruptcy when they have ceased making payments for some time, or when the creditor’s confidence has been lost. If bankruptcy is granted, creditors must register their claims within the time prescribed in the court’s insolvency declaration. Failure to do so on the part of a creditor will result in the cancellation of their priority rights. The court then appoints a trustee, or official receiver, to verify the claims. The retention of title clause can be cited by the creditor, in order to claim his property.

Since 2017, submissions of claims where bankruptcy procedures are involved must be made electronically, via the Central Solvency Register (www.regsol.be), which records all bankruptcies over the last 30 years.

The judicial restructuring process (reorganisation judiciaire), designed to reorganise a company’s debts with its creditors, can be granted by the court upon request of any debtor facing financial difficulties that threaten its continued business in the short- or medium-term. The debtor makes a reasoned application to the Registry of the Commercial Court in order to be granted an extended period to pay the debt. This extended period is normally set at six months, during which the debtor must propose a reorganisation plan to all of its creditors. 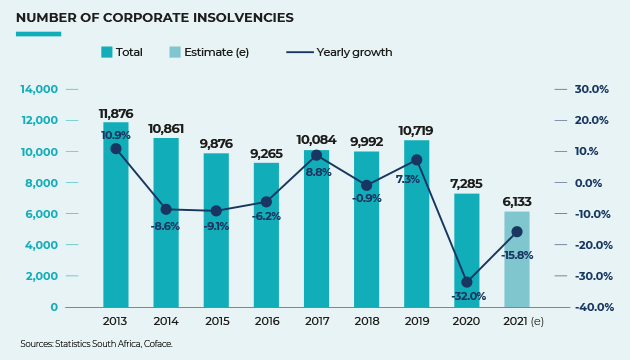