Panorama - In Front of the Globalization of the Wine Market, Europe Bends But Does Not Break

European wine consumption has fallen over these past years, like that of France, which is a third of what it was 50 years ago. On the other hand, wine consumption has increased in the rest of the world, driven by the households of the two leading global economies—the United States and China. Moreover, the latter will become the leading global consumer of wine before 2030 (ahead of the United States and France) and will drive global growth over the next 15 years.

However, production has increased for the first time in five years in certain regions. It is the case for some parts of Europe, notably in Spain and to a lesser extent, in Italy. We find the same trend in South Africa, Australia, in the US and even in Chile, countries where the producers of the famous “wines of the new world” are emerging.

In Europe, faced with the growing gap between supply and demand, the European actors are seeking opportunities in the rest of the world, but this new international situation will have different effects depending on the countries. If the French quality is still recognized throughout the world, the Spanish model, based on the massive production compared to farmable land seems vulnerable to international
competition.

THE NEW DEAL OF THE WORLD WINE CONSUMPTION

Fall in European consumption Wine consumption fell by 16.6% between 2000 and 2014 in Europe (1) because consumption habits have changed. Therefore, the three countries that have most reduced  their consumption (see graph n° 1) between 2003 and 2013 are also the leading producers on the continent, i.e. Spain (-34%), Italy (-26%), France (-17%). Conversely, the consumption of Germany (+3%) and United Kingdom (+9%) has increased. In total, Europeans have cut their consumption by around 17,000 hectoliters, which represented 60% of French annual consumption in 2013. A study on France, carried out by FranceAgriMer (2) concludes that wine has gone from a part of a meal to a cultural drink. However, the country remains the leading consumer of wine per inhabitant worldwide (43.8 liters  drunk per year compared to 28.3 for the European Union-15). These downward trends will continue, due notably to the measures taken to reduce drinking and driving, responsible for 20% of fatal accidents in Germany and 30% in France. Since January 2015, the blood alcohol limit authorized for driving in France for young drivers has fallen from 0.5 grams per liter of blood to 0.2, which should result in a further adjustment of wine consumption in favor of drinks with lower percentages of alcohol.

In order that wine consumption increases during the next decade in a country, it is necessary that in addition to a change in social and cultural habits, at least one of the following conditions is complied with: an increase in the population, growing urbanization or growth in economic activity. Asia is the world area which could achieve these three objectives.

Strong increase of the world population

According to Coface, the world's population will exceed 8 billion inhabitants in 2023, compared to 7.3 billion in 2014 (see graph n° 2). The rate of average annual growth during the next decade (+1.1%) will be similar to that observed over the past ten years (+1.2%). A study by the FAO and the OECD (4) estimates that close to half of the additional inhabitants by 2024 will come from Asia, whereas even within this region, a country like Japan will see its population fall by 3 million inhabitants. This increase in the world's population represents an opportunity for the wine sector, all the more so because it is accompanied by an urbanization that facilitates the distribution of food products.

In 2014, 53.4% of the global population lived in an urban area, compared to 46.5% in 2000. The United Nations (5) forecasts that this ratio will be 66% in 2050. This increase is mainly due to the Southeast Asia and sub-Saharan Africa regions which have seen their population migrate massively towards cities (see graph n° 3). In 2014, the share of the urban population was 56% in Asia and 37% in sub-Saharan Africa, compared to 36% and 31% in 2000. Chinese urbanization follows the trend of the continent. Since 53% of the global urban population lived in Asia in 2014, the prospects are promised. The countries of Europe and Latin America have reached a mature level of urbanization, 74% and 80% of their inhabitants living in a city (figures relatively stable since 1985). However, they only represent 14% and 13% of the global urban population. Both through its change to come and its size, urbanization in Asia will modify the eating and purchasing behavior of populations. 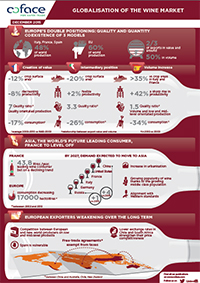 Diese Veröffentlichung herunterladen : Panorama - In Front of the Globalization of the Wine Market, Europe Be... (1,11 MB)